The Mirror of the Stars Theory

The Mirror of the Stars

Argimusco in Sicily, called “The Mirror of the Stars”, is a high plateau situated just north of Mt. Etna, but is also a marvelous site of shaped megalithic rock structures, considered to be arranged to mimic the pattern of the constellations which they represent.  It lies within the boundaries of the communes of Montalbano Tripi (which is built on the site of the ancient Abacaenum) and Rocella Valdemone.  We say that rock art of any kind that represents the constellations (not only modern zodiac signs) is founded on the ancient philosophy of astrology known as sidereal astrology.  Not surprisingly, the site has been categorized as being geomantically significant…and has drawn esoteric and occult practitioners throughout the centuries.

The Eagle is one of the most fascinating megaliths. It is formed by the overlapping of blocks from the pentagonal faces. The megalith is a bird of prey, with wings half-spread and the head facing south. The eagle in hermetic symbolism is a privileged being which connects earth with heaven. It is the symbol of the soul of the deceased. The latter after the death of material life is born to new life (like the alchemical phoenix rising from the ashes, the soul rises from the alchemical ashes). In the background of the Aquila, stands the beautiful cone of Mount Nettuno (Rocca Salvatesta) that probably in the economy of the site acts as solstice or equinox indicator. 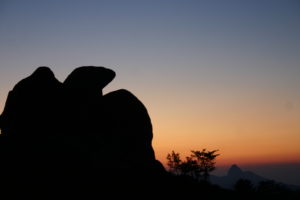 On Argimusco the statues of the Pelican, the Owl and finally a rock that resembles the alchemical alambic have been found. 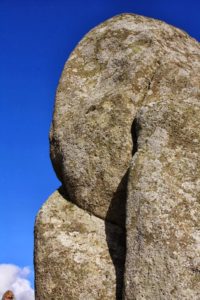 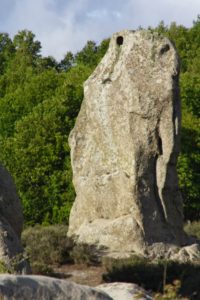 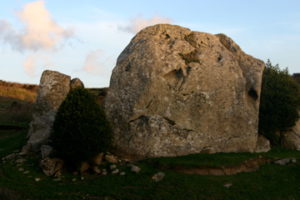 On the wall facing west, you notice the haughty profile of a young man who looks with his face upwards to the setting sun. The dual representation suggests the chthonic Italian deity of Janus, then adopted in Roman religion, to whom is dedicated the month of starting of the year.  With it were measured various passages of the sun on the solstices on the north-south diagonal. In fact, the Great Cliff of Janus plays a central role in any relationship north (Aeolian Islands) and south (Etna). Certainly, the two faces cliff represents. 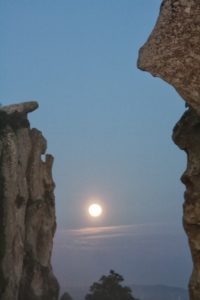 If we with a look towards the west, we can admire the incredible precision, almost “portrait”, of the megalith of the ‘Praying Woman’ or ‘Virgo”. It is a mysterious androgynous figure twenty-six meters high with her hands clasped in prayer. You notice the elbow, the mantle, the knee, the Phrygian cap on the head, and even the pedestal base. If we approach, however,. 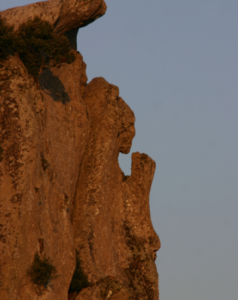 The Virgin is the center of the “Mirror of the stars” staged at Argimusco, since all other figures play an ancillary role with respect to it. As a matter of fact, the sun rises in Virgo at summer solstice of 10,500 BC. It embodies the feminine divine figure, which is lunar liquid mercury, as opposed to the divine Apollonian, masculine, solar disk, put in alchemical terms. As a mercurial element, it is precisely located near the Serpens constellation and the bearer of snakes (Ophiuchus), or the symbol of the Caduceus of Hermes (Mercury) consisting of a rod around which wraps themselves, in fact, two snakes (now the symbol of medicine). Particularly significant, high on the megalith of the Virgo is a rectangular pool, that we suppose was used for ritual ablutions. 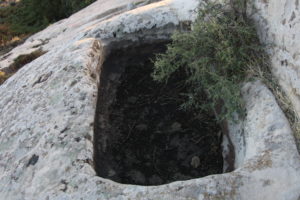 On Argimusco there is a Templar tetragram and a stone sextant.

The sextant was to serve, according to medieval astrological medical techniques, for the purpose of diagnostic and therapeutic use in association with the Sphere of Pythagoras and the astrolabe. 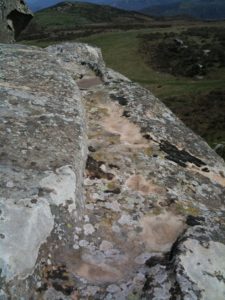